Nigerian Mom Ties Son In Sack For Four Days For Possessing Evil Spirit, Stealing From Others 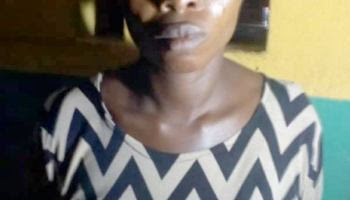 There was panic in Fesojaye community, Owoade, along Ilesa Road, Osun State, as a woman, identified as Iya Ayo, reportedly tied up her son, Ayo, and put him in a sack for four days for allegedly stealing and being possessed by an evil spirit.

According to sources the woman tied the boy’s hands and legs and threw him into three-sack since
Thursday.

The boy, who was about 10 years old, was said to be crying for help on Sunday when a neighbour fumigating beside the building heard his voice.

Rather than entering the building to assist the boy, the neighbour went to the community leader’s house to inform him of the development and was told to inform the Police.

The matter was incidented at the Oke-Baale police station in Osogbo, where a police officer was detailed to the community and ensure that the mother was excused from the Celestial Church she attends to the house, where the boy was freed.

Evidence from the video clip of the incident, which was obtained by Vanguard showed that the boy was weak when he was freed from the sack as resident of the community rain curses on the woman for the way she treated the boy.

The woman referred to as Iya Ayo was also heard saying the boy had frustrated her, hence, the treatment meted to him.

“Why would Ayo be stealing from people, he has frustrated me, he is possessed by evil spirit. I am right to have treated him that way”, she said.

However, the community leader, Alfa Shakiru Gbadegesin said the community was aware of the incident through a neighbour who was fumigating his surroundings and heard the boys crying for help.

He adds, “We heard of the incident yesterday morning around 11:30am, that Iya Ayo, tie Ayo hands and legs and throw him in a sack, two from his leg upward and one through his head and lick him in a wardrobe since Thursday through Sunday.

A neighbour clearing weeds heard the boy’s voice calling for help and rather than open the door, he first came to report the matter to me and I asked them to report the matter at the police station at Owoade and a police officer followed them to the house after getting her from the Celestial Church she attends”.

He, however, said the woman was not coherent when she responding to questions put to her, but added she has been released from the police station and the boy handed back to her.