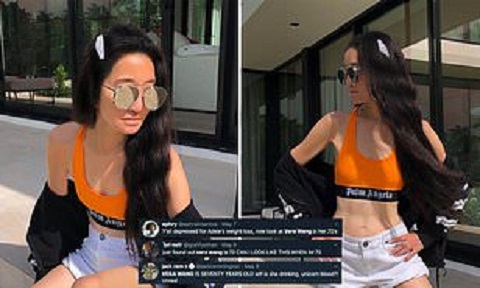 Fashion designer Vera Wang sent social media into a frenzy with her ageless looks after sharing a series of stunning photos of herself showing off her abs in a sports bra - prompting dozens of people to remark on the 70 year old's age-defying appearance.

In the photos, which were shot at her home in Miami, where Vera is currently quarantining, the bridal brand founder can be seen posing up a storm in a bright orange sports bra and tiny denim shorts.

But it wasn't her ensemble that sparked feverish excitement online - but rather her incredibly youthful appearance, with one Twitter user asking whether Vera has been 'drinking unicorn blood'.


'Vera Wang is seventy years old wtf is she drinking, unicorn blood? Unreal,' the person wrote while sharing images of the fashion designer.

Another chimed in: 'I was today years old when I found out Vera Wang is 70 years old and still looks [fire and bomb emojis].'

One Twitter user shared a black-and white photo of the designer in 1978 while comparing it to a more recent snap of Vera, writing: '1978 vs 2020. Vera Wang is ageless.' 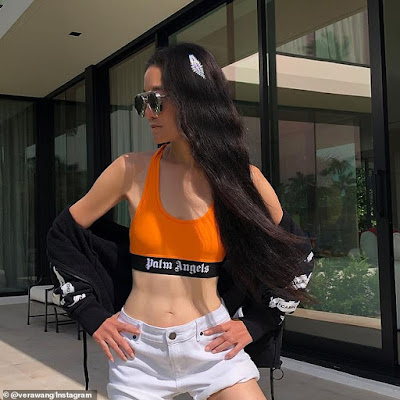 The official Vera Wang Twitter account even joined in the fun, replying to one Twitter user who questioned whether the designer is actually 70 to say: 'Fact check: truth.'

The pictures are part of a series of at-home photoshoots that Vera has been doing while in lockdown, and show the designer posing with her long brown hair around her shoulders, while a pair of large aviator sunglasses shield her eyes from the bright Miami sun.

'When a bit of bling is needed......' she captioned the photo, referring to two bold hair clips that are seen holding back her brunette locks.

'Pre-sunset,' she wrote alongside one of the other snaps, while a third was shared with the caption: 'Blingin it. Miami hair.'