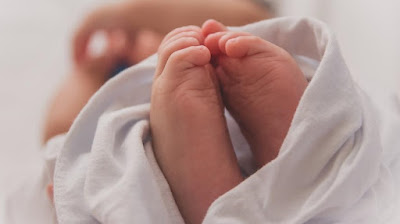 Odumosu, while briefing journalists at the command headquarters, said policemen attached to the Anthony Division, who were enforcing the curfew, intercepted a vehicle conveying Patrick Mbama and Ogechi Ekwebele, in whose custody the baby was found, at a pindown point in the Anthony Oke area of the state.

The CP said upon interrogation, Mbama and Ekwebele said they were on their way to deliver the baby to a childless couple, Izuchukwu and Cecilia Okafor, who were also arrested, adding that the suspects would be charged.


Odumosu said, “On April 26, 2020, around 2am, policemen from the Anthony Division, who were on enforcement duty at the Anthony Oke pindown point, intercepted a Toyota Sienna SUV conveying seven passengers. Among the passengers were one Patrick Mbama, 41, and Ogechi Ekwebele, 30, who were travelling together with a one-month-old baby suspected to have been stolen.

“They were coming from Orlu, Imo State. All the occupants of the vehicle were arrested for violating the ban on interstate travels and the vehicle was impounded.

“Upon questioning, Mbama and Ekwebele claimed that a childless couple in Lagos had paid for the said baby. The couple were identified as Izuchukwu Okafor, 51, from Oraifete in Imo State, and Cecilia Okafor, 40, and they were arrested.

“The name of the child’s parents as contained in the birth certificate tendered was that of the buyers. The baby’s date of birth was March 23, 2020. The biological parents of the baby were traced. The baby will be handed over to them today (Tuesday), while the suspects will be charged.”

In another development, 119 traders and violators were arrested at the Ilepo Market and Agege for violating the curfew and guidelines issued by the state government.

Odumosu said, “Markets are only allowed to open on Tuesdays, Thursdays and Saturdays. The enforcement team met stiff resistance from the traders. We sent reinforcement to the areas. Seventy male suspects and 25 female suspects were arrested. The suspects will be charged.”