Man Jumps Into Lake, Drowns While Running Away From Police 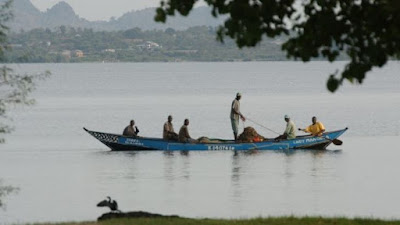 A 35-year-old fisherman died on Friday at Sare Beach in Suba South constituency after jumping into the waters of Lake Victoria while trying to escape police arrest.

The fisherman, who is a Tanzanian national and identified as Mustapha Ismael, was allegedly escaping arrest by police for being found outside past the curfew hours.

He drowned in the lake after he was overwhelmed by waters which have recently increased following heavy rains pounding Kenya.

According  to the owner of the boat which the deceased has been operating Julius Odhiambo, police officers stormed into the deceased`s house which is near Sare beach at around 7:30 pm where they found him seated with his wife in front of their house and threatened to arrest him.


“The deceased was trying to escape the police who had threatened to arrest him for being out past 7 pm and because of fear he ran towards the beach, jumped into lake and died,” he said.

Odhiambo said that on noticing the arrival of police, the Tanzanian’s wife immediately rushed inside the house and locked herself in while her husband ran towards the lakeshore with one of the police officers pursuing him  and upon reaching the beach he jumped into the lake and drowned.

Confirming the incident, the chairman of the beach William  Onditi said that the body of the deceased has been retrieved and taken to Suba  South Sub-county hospital awaiting post-mortem.

Suba South Sub County Police Commander Anthony Njeru said they have launched investigations to ascertain what might have transpired during the incident.