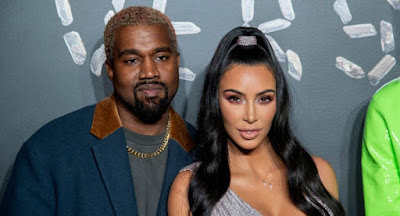 Kim Kardashian has been getting in plenty of family time with husband Kanye West and the kids during quarantine.

But the KKW Beauty mogul has reportedly been facing marital issues as they isolate amid COVID-19.

She and the Sunday Service creator have been 'staying at opposite ends of the house' in what appears to be a hostile environment for their relationship.

'Kim and Kanye are arguing and at each other's throats during this pandemic,' a source told The Sun.


They continued: 'Kim is getting stir crazy, as she's used to being on the go. It's also a lot of time alone with the kids for her.

'She is frustrated with Kanye and thinks he's not pulling his weight in family responsibilities. They've been staying at opposite ends of the house to keep things civil.'

Last month, another insider told Us Weekly: 'Kim and Kanye have been arguing a lot during the quarantine. Kanye is really getting on Kim’s nerves.'

But Kanye, 42, is reportedly making an effort to give his wife some space, taking the kids to Wyoming.

A source told HollywoodLife: 'Kim really needed a break and some alone time so Kanye took the kids away to give her one.

'She loves the kids so much, but like any mom, she just needed time to herself. She needed a break from the kids and the screaming.'