Former WWE Star,Nikki Bella Was R.a.p.e.d Twice In High School And Says Virginity Was Stolen From Her 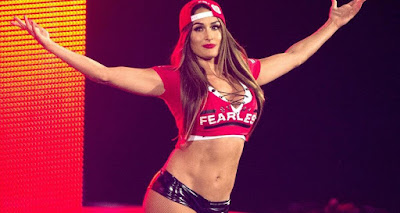 Nikki Bella says her virginity was stolen from her as she opened up about being r.a.p.e.d twice in high school.

The former WWE star revealed the terrifying experiences she went through in her youth in her new memoir Incomparable, which she co-wrote with twin sister Brie.

The 36-year-old, whose real name is Stephanie Garcia-Colace, says her virginity was stolen from her by a guy she thought was her friend.

The wrestling star, who is expecting her first child with her fiancé Artem Chingvitsev, wrote: "My virginity was stolen from me, without my consent. I was r.a..p.e.d, by a guy I thought was a friend, while I was passed out at a party," reports Us Weekly.


She added: "I'd had too many beers, and maybe some shots of hard alcohol, and I only woke up because my stomach hurt - I came to, and this guy was both on top of me and inside of me.


"I pushed him off and ran out of the room - he followed me down the hall and asked me if this meant we were now boyfriend/girlfriend. I had never even seen a p.e.n.i.s, yet I was no longer a virgin."

While trying to recover from the horrifying ordeal, it happened again just a few months later, this time at the hands of a college-aged man after she agreed to drink some alcohol.

The Total Bellas star writes: "I thought that if I gave in on this, maybe they'd leave me alone. I hadn't drunk very much before I felt really dizzy and stood up to go to the bathroom, thinking I might vomit.

"One of the guys followed me in and bashed my head against the bathroom sink - I came to when he accidentally switched on the blow-dryer with his elbow.

"I had clearly been roofied - I was groggy, and I couldn't see straight, but I could see four condom wrappers littered across the bathroom floor and realized that I had been r.a.p.e.d.

"I hit him in the face and ran from the bathroom - my friend was gone and the door was open. I took off into the night, sprinting across empty fields until I made it back to the hotel where we were staying with her mom."

Nikki says that after looking back on the awful assaults, she now understands the mentality of victim-blaming.


According to People, she wrote: "There is the horrible offense in the moment, and then the shame and blame that follow and feel almost worse than the original pain.

She said in a new interview with the publication: "When that happened to me, I immediately just felt so ashamed and blamed myself, and that's what made me want to keep it such a secret.

"And keeping that a secret and blaming myself, I started to lose my confidence. I started to disrespect myself. And then the relationships I got into at a young age, I let other people disrespect me and felt like, that's okay, this is what I deserved."

Nikki said it took her a long time to change the way she thought about the assaults that had been inflicted on her.

She says she wanted to finally share her story after realising so much would have changed for her if she'd let herself deal with it properly when she was younger.