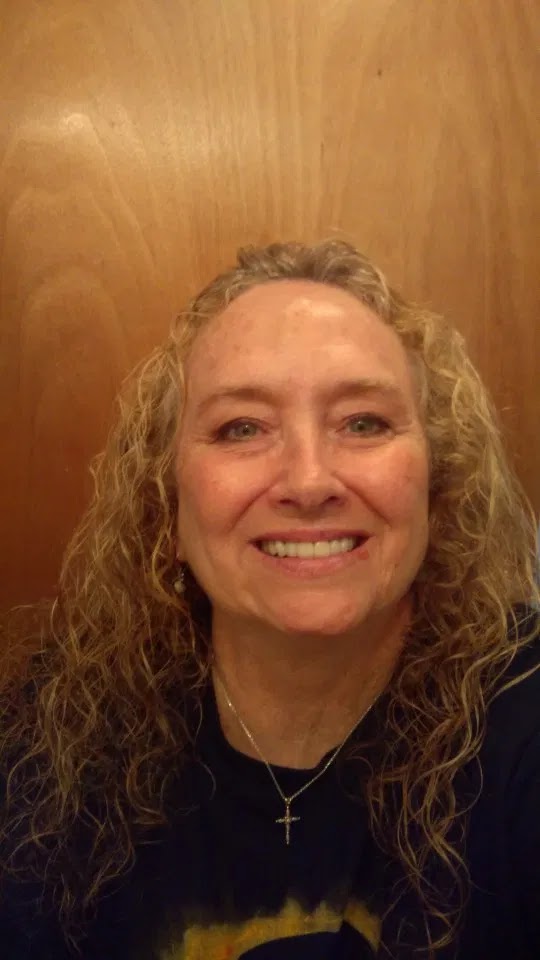 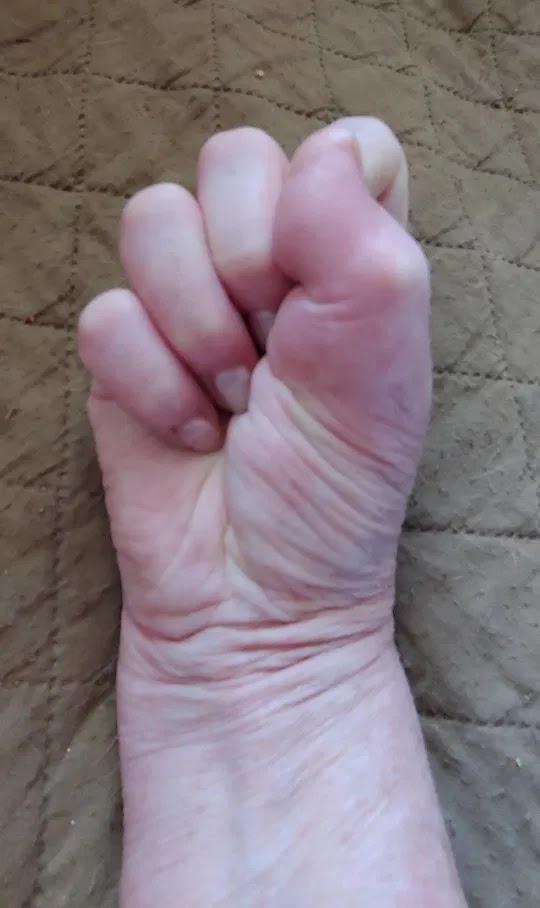 Working as a dental hygienist for over 40 years, Audrey Gaddis needs to be able to use her hands.

So when she developed skin cancer in her thumb, she worried it would mean giving up her career.

But thanks to her doctors, they were able to remove her thumb and transplant her big toe in its place, so she could use her hand as normal.

Audrey, 65, from Bryson City, North Carolina, explains: ‘I have been working at my craft for 44 years come this June.

‘I do love my work and patients and office workers. I had a plan on how many years I would continue to work. This situation with my thumb almost changed my whole plan.’

Audrey noticed something was wrong back in March 2017 when she saw something that looked like freckles near the nail bed on her right thumb.

She says: ‘I know some people have habits twirling their hair strands, nibbling their lip, and mine is peeling my extremely dry nail cuticles. 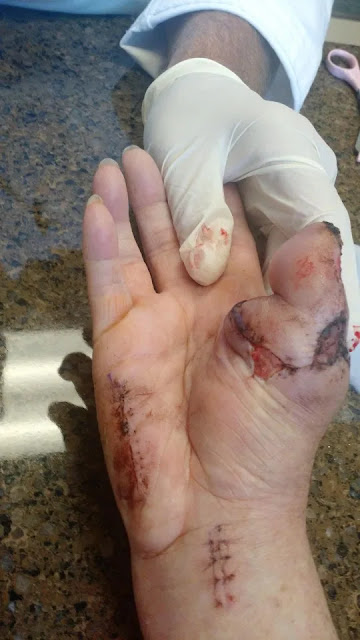 ‘I happened to peel the cuticle on that thumb into those “freckles”. Usually, in a few days, all is healed back. That didn’t happen this time.’

Audrey was a keen bowler and initially she thought that she had infected that open area with a bowling ball.

‘After about a month I thought I should have someone check it out,’ she says.

‘I took myself to an urgent care service to seek medical attention, or at least tell me what was wrong.

‘The physician’s assistant wasn’t sure what was wrong and decided to give me a prescription for an antibiotic.’

She finished the course and there was no improvement so by early May she decided to get an appointment with a dermatologist. 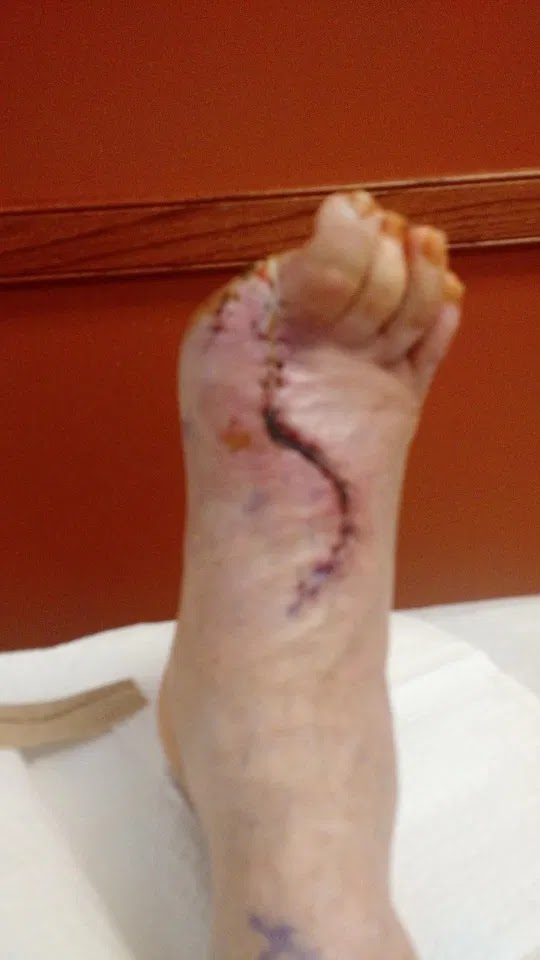 ‘I saw them within a week,’ she says. ‘It was decided to take a biopsy then cauterize the wound. The biopsy came back quickly as melanoma. My next appointment was with a cancer doctor.’

Melanoma is a skin cancer that develops from the pigment-producing cells.

Her cancer doctor decided to refer her to specialists at Carolina Hand and Foot, where she was seen in June 2017.

Audrey says: ‘I had every intention of returning to work if possible! I had hopes that only the tip of my thumb would need to be removed.

‘But no, they said it would be an operation to remove the thumb all the way to the joint that attaches to my hand.

‘Melanoma is the most invasive skin cancer that travels along the deepest layer of your skin. It can travel well beyond the surface site and also through the blood system. Therefore, the surgery to remove melanoma is quit extensive and often deep.

‘My doctor was very concerned for me and stated it would change my life. He then gave me his recommendation of using a toe in place of my thumb. I said yes right away.’

Audrey did not hesitate to go for the toe transplant surgery as she felt it was her best chance to continue work and life as close as possible to normal. 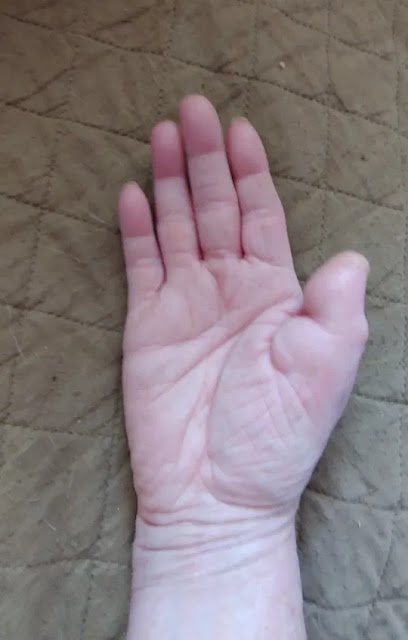 She says: ‘I had two questions for him – had he ever done this before? And how would it affect my walking?

‘Well, he laughed and asked if I would like to see the pictures. I knew he had performed this before but still…. one can’t be too sure!

‘He said walking wouldn’t be affected as much as we have always heard. As long as one has the ball of the foot immediately below the toe, it shouldn’t be a problem.’

Before the transplant could take place, surgeons had to remove her thumb, which they did on July 12 2017.

In the month between the surgeries, Audrey realised how difficult it was to lose the thumb.

She says: ‘The doctor wanted to give time for all my medical tests to return before deciding when to do the transplant.

‘It changed my life for sure at that point. I couldn’t button a shirt, hold a glass without a handle, play a piano, fasten a bra behind my back and there many more inconveniences. I did, however, learn to write using just my fingers.’

Fortunately, removing the thumb removed all the cancer and it had not spread beyond that area.

So, in late August, Audrey went ahead with the transplant surgery.

She explains: ‘The surgery was eight hours by two doctors. The first doctor removed my toe and prepared it for transplanting. The second doctor did the microsurgery to replace the thumb.

‘At first, I wasn’t sure about how it would look having researched pictures before my surgery. Most pictures were of men with a toe for a thumb. My doctor assured me he would do some cosmetic work on my toe to improve the look of it.’

The surgery went well but it was another two months before she could start physical therapy to be able to use it.

After five months, Audrey was able to return to work and use her new thumb, which has worked well ever since.

Although Audrey says the surgery was one of the best things that has ever happened to her, she admits that there have been a few minor drawbacks, including being unable to return to her bowling hobby.

She says: ‘My walking hasn’t been a problem and balance doesn’t seem disturbed at this time but I’m not sure that as I grow older that will be the same.

‘I don’t really go bare-footed except in the bathroom or at a pool. Mostly with a shoe on one doesn’t have an issue with balance or walking.

‘My drawback, if you will, would be that I can’t wear those pesky sandals that go between the big toe and the next but I hated those type shoes anyway.

‘My doctors have forbid me to bowl right-handed any more. I haven’t gone back to relearn left-handed. I wasn’t a great bowler so maybe I’m better left-handed?’ 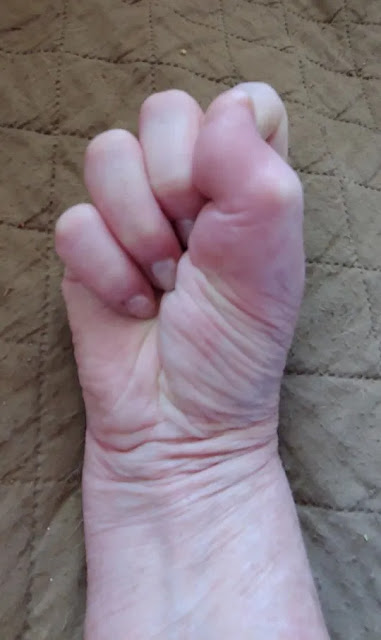