Uniport Killings: How We Gang-r,a,p,e,d Female Student, Killed Her, Two Others – Suspected Abductor 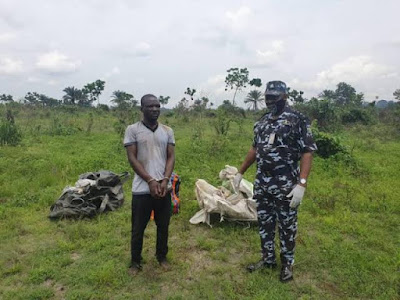 “We were five in number and we slept with the girl before we killed her last. We killed the boy first, killed the second and the girl last. We used gun brought by Bright”.

With this statement, one of the suspected abductors of three undergraduates of University of Port Harcourt, Friday Akpan (aka Trouble), narrated how he and his four other colleagues killed their victims.

The suspected abductors are in the custody of Rivers State Police Command after they were arrested last week.

Operatives last week exhumed the remains of the victims from shallow graves where they had been buried after being killed by their abductors.

Omoni said the police had arrested three of the suspects in three different locations and, upon interrogation, the suspects had confessed to the crime and led the police to exhume the corpses.

The spokesperson said: “The police at the early hours of 1st May recovered the decomposed bodies of Nelson Nwafor (male), Fortune Obemba (male) and Joy Adoki (female), all undergraduates of University of Port Harcourt who were abducted on April 7 at Choba in Obio/Apkor.

“In the course of investigation, one of the kidnappers was arrested on April 30 and on interrogation, he made useful confessions that led to the arrest of two others.

“Today, one of the suspects by name, Friday Akpan, took operatives to a forest at Eteo in Eleme LGA, where the bodies of the victims were recovered. The remains of the deceased students have been deposited in the mortuary.

“The suspects are still in our custody while we continue with our investigations. They kidnapped the students for the sake of ransom which did not come and so they killed them.”

Omoni disclosed that one AK47 rifle, three magazines, 72 rounds of ammunition were recovered from the suspects.

He added that the state Commissioner of Police, Joseph G Mukan, had assured the families of the deceased students that justice would be brought to bear in the circumstance, while appealing to the public to always assist the police with useful information.

One of the arrested suspects, Akpan, disclosed that the five-man gang raped the female victim before killing her.

Akpan narrated: “I am a trailer conductor. It is Bright that called us that somebody he worked with refused to pay him when the woman they worked for paid the money. He said the person took the money to buy a car. “He called the boy and the boy said he was coming. When he came to Bright’s house, we picked them. Bright took over the car and drove us to this sand forest.

“Bright said we should kill the boy otherwise he will expose us. Bright said his bags were in the boy’s house. We were five in number and we slept with the girl before we killed her last. We killed the first boy, killed the second and the girl, last. We used a gun brought by Bright.”