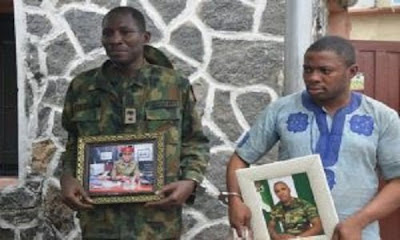 Operatives of the 81 Division, Nigerian Army on Thursday paraded 13 fake soldiers alleged to have used military uniform to perpetrate crimes in Lagos.

Yesterday’s parade has brought to 41 the number of suspected impersonators arrested the division in Lagos during the lockdown period.

It was gathered that some of the suspects even forged Army Provost letterhead which they used to apply for visa at foreign embassies not knowing that the military has a procedure known to embassies and high commissions.


According to the General Officer Commanding (GOC) Maj.-Gen. Olu Irefin, the operation checkmate airmed at curbing indiscipline among military personnel has yielded positive results during the lockdown.

Some of the suspects were caught wearing uniforms with the ranks of Colonel, Lieutenant Colonel, Major and Captain at different parts of Lagos, said Irefin.

“You will be shocked at the level they are impersonating the army. Both the Lieutenant and the Major have a photo frame they used to deceive members of public and when you check their internet profile or page they looked real as military personnel.

“They have used provost letter head to apply for visa but unfortunately they took a wrong channel of applying because we do not do it directly,” he said.