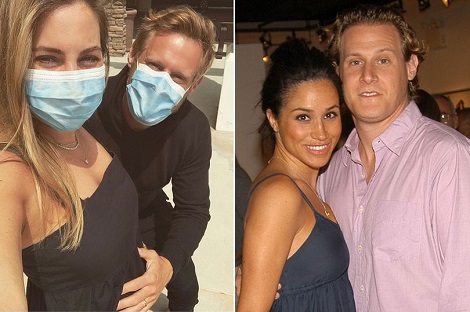 Meghan Markle's ex-husband is expecting his first baby with his new wife. Trevor Engelson, who the Duchess of Sussex was married to from 2011 to 2013, confirmed the news on his Instagram on Wednesday .

The 43-year-old shared a picture of his second wife Tracey Kurland, 33, showing off her baby bump, revealing that they are having a baby girl in September.

In the snap the couple wear face masks as he puts a hand on her bump. Proud dad-to-be Trevor captioned the snap: "Future mother of the year and girl dad way outta his league! Best thing I've ever produced hands down.


"Baby girl, So excited to meet you in September."

Trevor announced his engagement to Tracey, a heiress, two weeks after Meghan married Prince Harry in May 2018.

They married in a lavish ceremony at the Rosewood Miramar Beach resort in Montecito, California, last May.

Meghan and Trevor started dating in 2004 before she found fame in Suits.

Engelson owns his own production company called Underground and produced films including Robert Pattinson's 'Remember Me', which Meghan starred in.

It was claimed that Meghan's sudden rise to fame contributed to the end of their relationship.