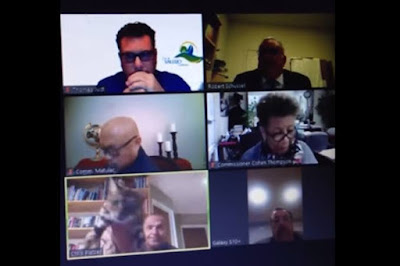 An official in a California city resigned after throwing his cat and apparently gulping a beer during a Zoom meeting with other functionaries.

Video of the Vallejo Planning Commission teleconference shows Chris Platzer picking up his pet and suddenly launching the animal off-screen.

“I’d like to introduce my cat,” Platzer said right before the kitty-toss.

The planning commissioner was also spotted taking sips from a green bottle, the Times-Herald reported.


And he was heard making demeaning remarks following the conference.

“I’m going to call bull— on you little b—s,” he said, according to the original commission meeting footage released by the Northern California city.

In an email to the Times-Herald on Saturday, Platzer said he had stepped down from the seven-person panel.

The resignation came days before the City Council was set to consider a resolution removing him from his post.

“I did not conduct myself in the Zoom meeting in a manner befitting of a planning commissioner and apologize for any harm I may have inflicted,” Platzer wrote in the email.

“I serve at the pleasure of the council and no longer have that trust and backing. I extend my gratitude to those who have supported me during my tenure. I have always felt that serving Vallejo in a voluntary position is honorable because Vallejo is worth serving. We are all living in uncertain times and I certainly, like many of you, am adjusting to a new normalcy.”