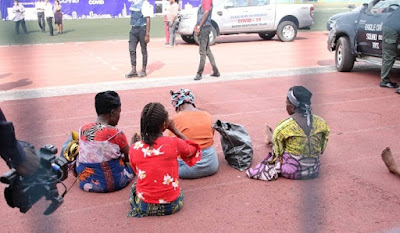 To ensure the protection of Rivers people, the Rivers State Government on Thursday arrested 22 traders entering the state from Anambra and neighbouring Abia State.

The traders who were arrested in three different sets told reporters that they live in Anambra and Abia States, but usually, do business in Rivers State.

They claimed that they were not aware that the lockdown was very serious in Rivers State because in their respective states, traders are allowed to move around.

One of the traders, Mrs Uju Nnamdi noted that she was coming to the state to sell her wares. She said though she is aware of the lockdown of the state, she wasn’t aware that her trading would endanger the state.


The driver of the truck, Mr Chijioke John said he was travelling to Onne from Onitsha, but picked the women at Ihiala in Anambra State.

He said the women pleaded with him to help them and he took pity on them since they were standing on the road.

The female traders were conveyed in a container to conceal their movement into the state. The driver said he opened one of the container doors for the traders to get ventilation

Rivers State Health Commissioner, Professor Chike Princewill said that the 22 traders will be screened to ascertain their coronavirus status.

He said that the screening is vital to ensure that they don’t infect the state. He said that his Ministry has stationed medical personnel to carry out this responsibility.

He said after the screening, the traders will be tried in line with the extant laws in place to protect Rivers people.

Professor Chike Princewill said it is embarrassing that a transporter would convey human beings in a container, just to beat the law.

The accused persons were later tried in a magistrate court assigned for that purpose by the Chief Judge of Rivers State.