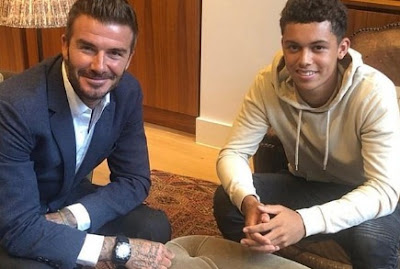 The 44-year-old has been busy setting up the new MLS franchise Inter Miami and joined his Class of '92 pals in transforming the fortunes of Salford City.

Now Beckham has teamed up with close pal Dave Gardner and ex-PR chief Nicola Howson to form Footwork Management Limited, according to the Daily Mirror.

Beckham, who retired from playing in 2013, is not a licensed intermediary but Gardner is reportedly on the Football Association’s list.


The Mirror reported that they want to develop an elite client base by attracting the likes of Manchester United starlet Mason Greenwood.

Ex-Nottingham Forest striker and agent David Johnson is also expected to be involved and Beckham was pictured with Johnson's son Brennan just days before the teenager signed a new contract at Nottingham Forest.