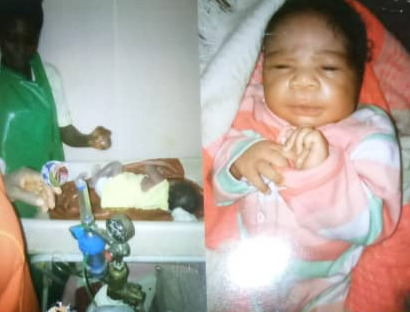 The syndicate operated from a maternity clinic in the Ijegun area of Lagos, the command spokesperson, Bala Elkana, said.

One Gift Micheal, 24, and Florence Douglas were arrested by the police while she was about to be mobbed by irate neighbours, who suspected that babies were sold in their clinic.

He said, “The two women with the baby were rescued and taken to Ejigbo Divisional Police Headquarters where investigation was conducted.

“Findings revealed that the said Florence Douglas, a native of Edo State, who is not a registered nurse, operates two maternity clinics in Ijegun.

“On interrogation, Florence admitted to have been in the business of selling babies for a while.

"She further confessed that the male baby found in their custody at Jakande gate Ejigbo, suspected to be a week old, was brought to her from Gombe and was to be sold for N500,000.

"The rescued baby who appeared sick with symptoms suspected to be jaundice, was promptly taken to hospital for medical attention.

"Worthy of mention are pictures of about 50 different babies in the phone of the suspect, believed to have already been sold.

“Babies are usually sold between N500,000 and N1m depending on their sex.”

The suspects have been handed over to the State Criminal Investigation Department, Yaba, for proper investigation.