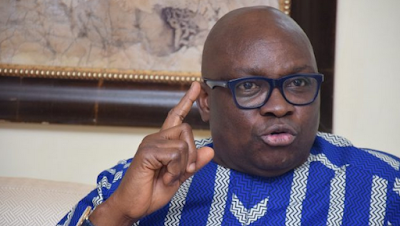 Aww, singing.... 'what more can you become in life, what more can you do in life, after becoming a governor twice, and have numerous businesses, is it not to retire and serve God, cus there's another place you are going to after the hustle on earthhhhhhhhhhhh (Earth stressed so much at the end of the song)'. Beautiful! Lol.

The Governor of Ekiti State, Ayodele Fayose, has said after retiring from politics, he would become a pastor of a “very big ministry”. He said his next target after leaving office is to become the president of the country after which he would go into full-time ministry (what a wawu, good life).

Fayose said his “popularity” and “influence” would serve him in achieving his ambitions. He said this during an interactive session with some reporters in Lagos.


“There is nobody reasonably who doesn’t know who Ayo Fayose is and the decision to me being president is spiritual and physical on the other hand because when your time comes, it will manifest,” he said.

“I am a force God has created at this time. When I retire, I’m going to become a pastor with a very big ministry.

“After being president of Nigeria, I will be a pastor who will be a major force all over the world.”

Really can't wait to see Mr Fayose on the pilpit. What a way to end one's life. And erm, you know
God forgives, LOL.