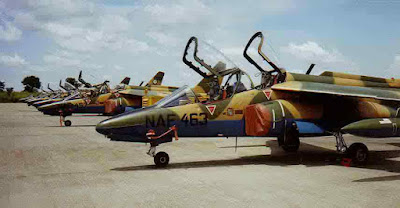 The Nigerian Air Force, NAF, has reorganised its air combat structure in the North-east for increased operational efficiency.

The Chief of the Air Staff, CAS, Sadique Abubakar, disclosed this during his opening remarks at the CAS Fourth Quarter Conference, which commenced at NAF Headquarters on Monday.

According to the CAS, the Air Component Commander has been replaced with a Commander Air Task Force (CATF), an Air Vice Marshal (a 2-star General), who reports to the overall Theatre Commander.

The new CATF is Idi Lubo, who was serving as the Air Component Commander. The NAF has also appointed three Divisional Air Liaison Officers (DALO) for the 3 Armoured Division as well as 7 and 8 Divisions of the Nigerian Army in the North-east. The whole idea is to ensure a better coordination of air efforts with ground operations.


Besides, the NAF has appointed an Air Liaison Officer for the Theatre Command to further limit the possibility of gaps in operations.