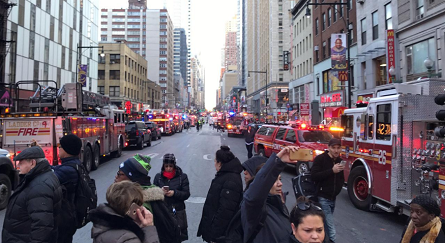 A man with a pipe bomb strapped to him set off the crude device in the subway near Times Square this morning, injuring the suspect and three other people at the height of the morning rush hour.

The suspect was identified as 27-year-old Akayed Ullah.

Law enforcement officials said he was inspired by the Islamic State group but had apparently not had any direct contact with the group. The officials said he lives in Brooklyn and may be of Bangladeshi descent. The officials spoke to The Associated Press on condition of anonymity because they were not authorized to speak publicly about the blast.


The man and three others were being treated for non-life-threatening injuries in what the mayor and police labeled an attempted terror attack.

The explosion happened in an underground passageway under 42nd Street between 7th and 8th Avenues. The 7:30 am blast caused smoke to fill the passageway, which was crowded with throngs of Monday morning commuters.