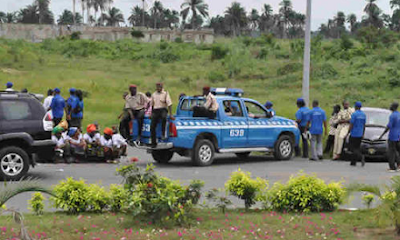 Sola Olagunju, the reckless driver who crushed an officer with the Federal Road Safety Corps (FRSC), Sunday Abolusoro to death in Ondo state has now signed a “documented agreement” with the family of the deceased.

Sahara Reporters exclusively learnt that the signed agreements have been documented in form of a Memorandum of Understanding (MoU) between Mr. Olagunju and the families of late FRSC officer Abolusoro.

Two sources in both families confirmed that the lawyers of the two parties were present in a meeting where the agreement was reached and signed.


Sahara Reporters had reported that Mr. Olagunju had on Saturday, November 25th, 2017 killed Abolusoro while he was performing his lawful duty on the Akure/Ilesha express road.

The reckless driver had speedily veered off the expressway and struck Mr. Abolusoro, a Deputy Commander (DRC) killing him instantly during a stop and check by the Federal Road Safety Corps manning the road.

The FRSC in the state had vowed to get justice for the deceased officer in court immediately he was killed.

On Wednesday, December 6th, 2017, the police arraigned Olagunju for manslaughter before the Magistrate Court sitting in Akure over the death of Mr. Abolusoro.

At the court, the driver (Olagunju) pleaded not guilty to the offense.

Who later disclosed that he was a medical doctor, was granted bail in the sum of one million Naira and a surety in the like sum.

However, one of the sources that had been speaking with SaharaReporters on the sad incident hinted the latest development on the signed agreement during a phone conversation on Sunday evening.

The source explained that the signed agreement was reached with the wife of the late FRSC officer on how best to take care of his two young children and the family he left behind.

He described the death of the deceased (late Abolusoro) as a very unfortunate one to members of his family.

This same source who pleaded anonymity revealed that the family members were not after the prosecution of the killer driver (Olagunju) despite being responsible for the death of their breadwinner.

According to the source, the total sum of five million Naira would be paid by the driver to the family of the deceased in order to help his widow start a business so that she can take good care of their children.

This source also informed that the money will be disbursed to the wife on a monthly basis.