PDP Has Become A Reference Point In Nigeria’s Democracy- Jonathan 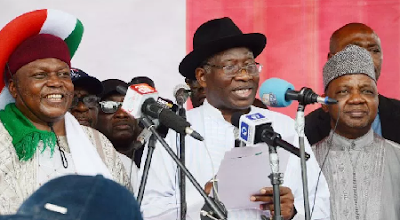 He said this on Saturday in Abuja while delivering a goodwill message at the party’s National Convention.

Mr. Jonathan said the party had over the years, remained focused and resilient in spite of several challenges, adding that he believed the party would remain foremost in leadership.

According to him, the PDP is a party with an indelible history and principles, and expressed optimism that the party will remain at the forefront of leadership by example.


“Ours is a party with an indelible history and proven record on its tradition and we have been consistent in standing firm.

“PDP is the only party that from the beginning, we have not changed our name or our identity in any form, we do not change based on election cycle. PDP is the only stable party in Nigeria,’’ he said.

He, however, urged all leaders to remain committed to the purpose and work for the interest of the party and the country.

“Today is a unique day because we are going to elect leaders that will steer the activities of the party for the next general elections and we charge those that will win the election today to carry everybody along.’’

Mr. Jonathan commended the outgoing National Caretaker Committee for its leadership and doggedness, adding that it had provided energetic and purposeful leadership at a very critical and trying period in the party’s political history.

Also speaking, former Vice President, Namadi Sambo, charged the delegates to conduct themselves in a peaceful manner to ensure a free and fair election.

Mr. Sambo said he was confident that the delegates would elect “the right people to serve as leaders in the party.’’

Delegates are expected to elect 32 new executive that would lead the party in the next four years at the convention. (NAN)