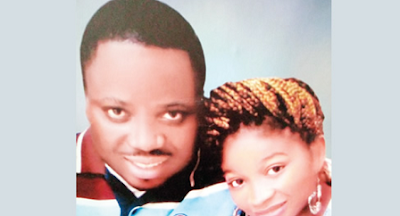 The Chief Magistrate, Mrs. O.A. Adelaja, ordered the police to duplicate the case file and forward to the Directorate of Public Prosecutions for legal advice.

Punch had reported that Olaoluwa and Maureen, who hailed from Imo State, had been married for five years and the union was blessed with three children.

According to Punch, the Lagos State indigene allegedly threatened to kill his wife during one of their disagreements at their home in the Oworonshoki area.


She was said to have packed to her mother’s house, but after three days, she returned for a party at her children’s school.

While Olaoluwa claimed that she drank local insecticide, Sniper, while at home, their five-year-old son, Richard, said his father tortured his mother and forced the insecticide down her throat.

“My daddy said my mummy should get out of the house. My mummy said no. In the night, my daddy woke my mummy up and said, ‘Mosquito is too much, let me go and buy otapiapia’. My daddy forced my mummy to drink it. She shook her head. She vomited.

“My daddy slapped my mummy. My mummy did not do anything to him. My daddy gave her one blow. My daddy kicked her. My daddy told her to get out of the house and carry her load. Small blood came out. My daddy slapped her, kicked her, machete her, blow her, and put otapiapia in her mouth and in the food.”

The case was subsequently transferred from the Oworonshoki Police Station to the Homicide Section of the State Criminal Investigation and Intelligence Department, Yaba.

Detectives reportedly removed the corpse from the Gbagada General Hospital morgue where it was initially deposited by Olaoluwa, to the Lagos State University Teaching Hospital, Ikeja, for autopsy.

The result of the autopsy was said to have been released to the police.

The 32-year-old was arraigned on Wednesday on one count of murder.

The charge read, “That you, Olaoluwa Adejo, on November 12, 2017, at about 6.30pm, on Peluola Street, Oworonshoki, Lagos, in the Lagos Magisterial District, did kill one Maureen Adejo, aged 28 years, by beating her to death with fist blows and a belt, and also poisoning her food with a Nopex Sniper insecticide, thereby committing an offence contrary to Section 222 and punishable under Section 223 Cap. C17, Vol. 3 of the Criminal Law of Lagos State of Nigeria, 2015.”

The defendant’s plea was not taken for the offence.

The Police Prosecutor, Inspector Chinalu Uwadione, filed an application for his remand in prison.

The magistrate, during the proceeding, queried Olaoluwa for the action.

The defendant, who denied the allegation, said his wife had a mental problem and he did not know when she took the insecticide.

The magistrate said the defendant’s claim was doubtful.

She asked that the case file be duplicated and sent to the DPP for legal advice and ordered the defendant’s remand in prison.

Adelaja adjourned the case till February 28, 2018 for legal advice.