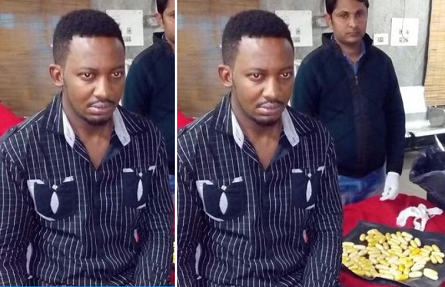 A 26-year-old Nigerian national was arrested and 260-gram heroin worth Rs 26 lakh was seized from him in New Delhi, police have said.

The accused, Justin, used to conceal the drugs in audio speakers to avoid detection by the police.

He was arrested on November 24 from near Dada Dev Khel Parisar, Palam, Dabri Road, Delhi, when he had come to supply heroin to someone, they added.

He was earlier arrested by Punjab Police for drug smuggling. After completing his sentence, he moved to Delhi and started supplying heroin here.


During interrogation, Justin revealed that he had come to India on business visa in 2011.

He started exporting clothes to Nigeria from Ludhiana, but he suffered losses, the police said.

During this period, he came in contact with locals who introduced him to drugs, and he also started consuming heroin.

Gradually, he started supplying narcotic substance as his friends from Nigeria were also involved in drug trafficking, the police said. He was arrested by Mohali Police in 2015. He was convicted by a court there.

He came out of jail in May, 2017 and came to Delhi. Since he was unemployed and addicted to heroin, he again started supplying heroin to earn quick money. He will be charged again.