Girl Colludes With Boyfriend, ‘Kidnaps’ Self To Extort N500k From Grandmother 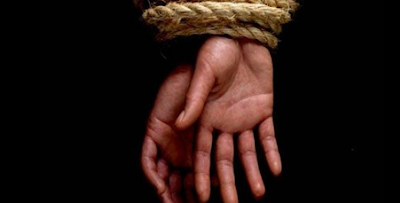 The Anti-kidnapping Unit of the Imo State Police Command has arrested a seventeen-year-old girl, Favour Vincent,who allegedly colluded with her boyfriend, Emeka Godwin, a serving army officer, to plan her own kidnap.

They were paraded at the police command headquarters in Owerri, the state capital, by the Police Public Relations Officer, Andrew Enwerem.

Enwerem explained that while the five suspects were rounded up by the operatives of the command, the army officer who received the ransom had yet to be arrested.


The police spokesperson said, “Miss Favour Vincent, and his boyfriend (Godwin) conspired to fake her kidnap with the intent to collect a ransom of N5m from her Togolese grandmother.

The suspects eventually collected N500,000 as ransom which was received by the purported boyfriend army officer. He immediately fled with the money.

The command on receiving the news of the kidnap,made efforts to rescue the victim and arrested the suspects.”

Enwerem said that in the course of investigations, it was discovered that Favour and her elder sister, with the aid of the other suspects, planned, executed the kidnapping and successfully collected the ransom.

“The girl confessed to the crime and the command is on the trail of the purported army officer. Investigation is ongoing with a view to charging them to court.

The state commissioner of police, Chris Ezike, has equally charged the anti-kidnapping unit of the command to ensure that Godwin is arrested immediately.

Favour told our correspondent that she planned her kidnap in order to get money from her grandmother whom she accused of neglecting her and her siblings.

She said, “Our grandmother is very rich but she doesn’t take care of us. She gives money to outsiders but she refuses to give to us.

“My sister and I along with Emeka (Godwin) planned the kidnap. It was my boyfriend who received the N500,000. After he collected the money. He ran away and his phone line no longer went through.”