Father Of Two Hangs Self In Osun 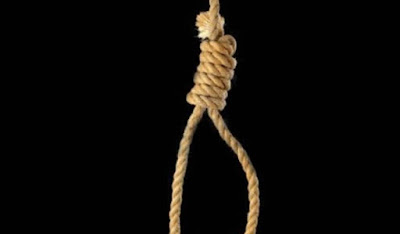 The residents of Okinin in the Egbedore Local Government Area of Osun State were thrown into confusion on Monday following the discovery of the body of a commercial motorcyclist, identified as Gafar, dangling from the ceiling of his apartment.

The lifeless body of the motorcycle rider was said to have been discovered by his son about 8.40pm.

He was said to have raised the alarm, attracting the attention of neighbours and passersby. The wife of the deceased was said to have travelled out of the town earlier in the day and she had yet to return as of the time the incident happened.


A resident of the area, who spoke on condition of anonymity, said there was confusion following the discovery of the corpse, adding that the man left behind a wife and two children.

He said, “Recently, Gafar sold his motorcycle which was his only source of income. Since he took that decision, he had been finding things very difficult.

“One of the children of the deceased told sympathisers that feeding had been difficult for the family after his father sold the motorcycle.

The child said he did not know if the motorcycle was giving his father any problem, adding that nobpody in the family knew why he sold the motorcycle.”

Another resident of the area, Bolu Adedeji, who spoke with Punch correspondent on Tuesday, said the death of the man came to his neighbours as “a huge shock.”

He also said the son of the late motorcyclist had stated that things had been difficult for the family since the nation’s economy nosedived.

Adedeji said, “The boy told the sympathisers that the family did not eat on Sunday, the day before the man decided to end it all.

Another resident, who also spoke on condition of anonymity, told Punch correspondent that  some eleders of the community repored the incident to the  policemen from the Dada Estate Police Station.

He added that some law enforcement officers from the stattion came to the scene to remove the body.

He said the residents belived that the body was taken to a mortuary in the area.

The Police Public Relations Officer in Osun State, Mrs. Folashade Odoro, confirmed the incident when was contacted on the telephone.

Odoro said, “We have started investigation into the case.”