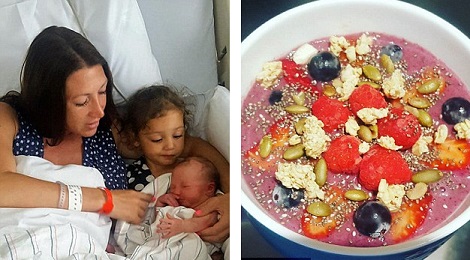 A mother who warded off postnatal depression by drinking teas and smoothies made from her raw placenta has revealed how she shared a cup with her boyfriend - whose teasing friends called him a 'cannibal.'

After suffering with anxiety for years, Stephanie Gardner, 31, feared she would be susceptible to postnatal depression when she fell pregnant with her eldest child Katie, now two.

Finding scores of mums on the internet attesting to the benefits of consuming their placentas – either in raw or dried form – to boost energy and mood, Stephanie said: 'I decided if trying it helped ease my anxiety, it was worth a shot. What did I have to lose?'


So, Stephanie, who works in marketing, of Long Beach, California, followed in the well-trodden footsteps of 'hippy mums' and gave it a go.

She continued: 'I used to be a real sceptic, but over the past few years, I've tried more alternative medicines, like reiki and acupuncture.

'There's a real community of hippy mums where I live, so this sort of thing isn't unheard of.'

Following Katie's birth, Stephanie paid $200 (£152) to have her placenta encapsulated into both raw and dried form, so she could ingest it – something she has since repeated with her second baby, Isabelle, now six months.

With the raw portion of her afterbirth, she made smoothies, blended with strong-flavoured fruit like pineapple and almond milk, and chamomile tea.

Her children's father, software engineer Jason Major, 30, even tried a swig, and swears it boosted his energy levels substantially.

'The tea didn't taste great. It was a quite meaty, gamey flavour,' admitted Stephanie. 'We'd have been better off turning it into a chicken noodle soup, or something with stronger flavours.

Luckily, despite her fears, Stephanie did not experience postnatal depression after having Katie and remains positive the placenta pills and smoothies warded it off.

Keen to share her experience with other mums, Stephanie, who also runs a parenting Forum called Parent Daze, and an Instagram of the same name, posted about the benefits of placental ingestion on Facebook, but was, sadly, met with some derision.

She explained: 'Some people were interested and asked questions, but others thought it was gross, and said it was the most disgusting thing they'd ever heard.

'But every mammal apart from humans eats their own placenta, and I've noticed huge benefits after consuming mine.

'There's been such a big change in my mental health. I'm a much happier, more rounded person now.