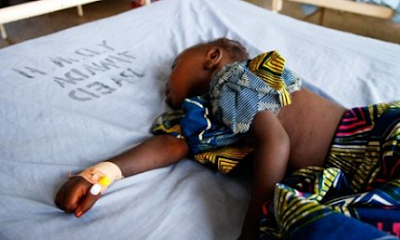 15 deaths and 864-suspected cases have been recorded as a result of measles outbreak in Gombe State from January this year to date.

The Cluster Consultant for World Health Organisation (WHO), Dr.  Raymond Dankoli disclosed this during a parley with journalists in Gombe on Thursday.

The meeting was organised by the state Primary Health Care Development Agency (PHCDA) as part of a sensitization campaign against the 2017 Measles Campaign Vaccination scheduled for November 30 to December 15.


Dankoli said the agency had learnt from the past mistake in a similar exercise held in 2015 which led to a below par performance of 84% and it is now poised to conduct a successful exercise with an eye on achieving 95% and above coverage.

He said the agency had already taken proactive steps in response to the disease outbreak by making available drugs for treating the disease, with trained staff carrying out surveillance and to report new cases for prompt action.

Dankoli said this year’s vaccination exercise would target children from 9 – 59 months, stressing that every child is expected to receive treatment irrespective of the child’s immunization status.

“The 2015 experience was the worst. We want to make that of 2017 better. All measles deaths are preventable,” he said.

The WHO Cluster Consultant said it had become necessary to partner with the media in order to properly sensitise the public since the success of the campaign would be measured by the number of children to be vaccinated.

Dankoli said the agency is reaching out to relevant stakeholders like traditional, religious and community leaders for proper enlightenment of the citizenry in order to guard against the pitfall of the previous exercise

He said people should the disregard the controversy surrounding previous exercises and the recent monkey pox outbreak, assuring that the agency would not fold its arms to allow harmful products to be administered to the people.

The WHO consultant urged parents to make available their wards for vaccination once the exercise commences, stressing that donor agencies had spent billions of Naira to supply the vaccines.

Earlier, Musa Ibrahim, Deputy Director of Immunization at the GSPHCDA, said the agency was embarking on aggressive advocacy and dialogue to ascertain why communities are refusing vaccination because of the poor coverage of 2015.

He applauded the state government’s prompt response by being the first state in the country to release it’s counterparts fund for the campaign against measles.

Ibrahim disclosed that materials for the vaccination exercise have started arriving the state.

He said the exercise would be staggered across the state in two for proper supervision.

He urged parents to ensure the safekeeping of vaccination cards to be issued during the exercise, as it would be used for the purpose of evaluation survey.