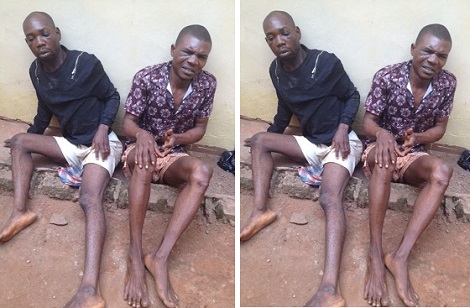 Police have arrested two members of a gang who specialised in robbing, raping and blackmailing female victims in Enugu.

Amaraizu said the suspects were apprehended by an irate mob, who subjected them to thorough beating to the point of killing them before they were rescued and taken into custody by the police.


The suspects were said to have swindled their female victim of some amount of money and also gang-raped her. They later asked her to be paying them anytime they call her.

Narrating her ordeal, their victim said that on October 26, she came out from her street to Emeka Abalu in Phase Six Trans Ekulu, Enugu to board a tricycle going to Enugu Town. But unfortunately ran into the tricycle with some boys.

Unknown to her, they were fraudsters and hoodlums operating as tricycle operators.

They started telling her that they were foreigners looking for a certain address.

Amaraizu quoted the victim to have said: “Before I knew what was happening, I lost my consciousness and was taken to where I was gang-raped by three of them after collecting all the money in my possession.”

The victim added that they later left her at that place but continued calling her the following day with a threat that if the remaining part of the money was not paid, she would face some dire consequences.

They also told her she had taken an oath not reveal the transaction to anybody to avoid sudden death.

But the incident was reported at the Trans Ekulu Division.
The PPRO said that while operatives were looking for the hoodlums with their tricycle, information got to them that the same men had been uncovered by some angry mob around Park Avenue axis of the state.

Although the tricycle driver had managed to escape from the scene with his tricycle before the irate mob intercepted them.

Amaraizu said: “Suspects are helping the police operatives in their investigations in relation to their alleged fraudulent activities and rape.