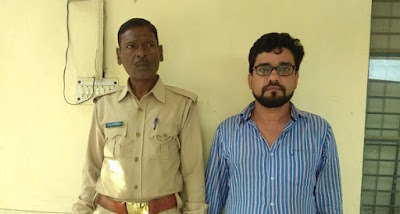 A 35-year-old bookseller has been arrested for allegedly sodomizing an 11-year-old Nigerian boy inside the school premises for the last three-four years. He was arrested from Sigma Sector 2 late night on Tuesday. The accused has been sent to judicial custody for 14 days.

"We have sent him to judicial custody for 14 days. The child was sent for medical examination on Tuesday. We have initiated the proceedings. We will also talk to other students with the help of child counsellors," said a senior police official.

The accused has been identified as Ashok Mishra, who runs a bookshop inside the school in Pi Sector 2 of Greater Noida. Mishra had been sodomizing the Nigerian child by luring him to the washroom, his shop etc.


The 11-year-old victim remained silent all these years as he was allegedly being threatened with dire consequences by the accused.

The incident has once again highlighted the loopholes in the safety of the children in schools. Last month, a 7-year-old was found dead inside the washroom with his throat slit at the Ryan International School in Bhondsi area of Gurugram.

"The administration was shocked to come across such incident. We respect the parents and the child is important to us. We will take all the necessary steps and help the police. We have also formed a 6-member committee to look into this matter. Security will also be increased," said Mukta Mishra, Principal of the school.

Following sexual assault allegations of a Nigerian student, police teams and the District Magistrate on Wednesday conducted investigations at the school in Greater Noida and collected CCTV footage of the premises.