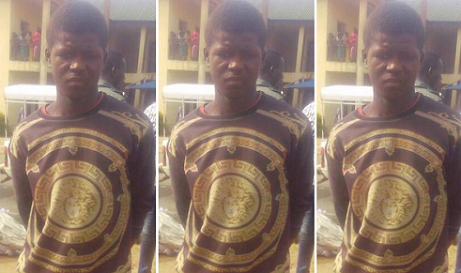 A 29-year-old man, Kehinde Ariyo, has been arrested by the Osun Police Command for allegedly raping an 85-year-old woman to coma at Ilesa town in the state.

The police commissioner in the state, Mr Fimihan Adeoye, disclosed this to newsmen on Monday in Osogbo.

Adeoye said the incident happened at Ogudu area in Ilesa, where the suspect forcefully had carnal knowledge of the old woman after gaining access to her residence around 11 pm on Oct. 27.

He added that the woman sustained various degrees of injuries on her body, including her private organ, and eventually passed out in the process before she was resuscitated at a private hospital.


According to Adeoye, the suspect lives in the same area where the victim resides and had gone on errands for the old woman several times in the past.

“The woman passed out during the rape, but came back to life after some hours, the suspect was arrested the next day.

“This is the height of wickedness in our society. The boy injured the woman in the process, but she has been treated “, Adeoye said.

The suspect admitted having committed the act, claiming to have been drunk at the time of committing the heinous act.

“Mama asked me to sleep on a couch in the passage. I was already drunk and did not know what happened afterwards,” he claimed.