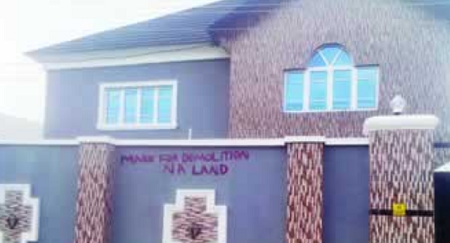 Residents of Mesiogo Estate in the Akobo area of Ibadan, Oyo State, say they are uncertain of their future in the area after their houses were marked for demolition by soldiers from the 2 Division of the Nigerian Army, Adekunle Fajuyi Cantonment.

According to the landlords, the soldiers informed them that the land on which the estate was located belonged to the military barracks. The residents said they were told to pay fine failing which the houses would be demolished.

Spokesman for the community, Amos Ishola, said the estate was one of the private estates built by a former Oyo State Governor, late Kolapo Ishola, and that there were documents that showed that the community did not encroach on military land.


He said, “The late Chief Ishola was a surveyor and he bought many plots of land on which he built residential estates. Mesiogo Estate is one of them. Many of his family members were given parcels of land to build their houses on the estate.

“The soldiers at the Adekunle Fajuyi Cantonment said some people encroached on military land and that the communities had been identified since 2010. They said the communities were aware and they had been talking to the communities through the late Chief Ishola before his death. He reportedly asked his son, Kunle Ishola, to look into the matter.

“We learned that the Ministry of Defence set up a committee to look into the matter and re-establish the military boundary. The committee was asked to fence the intruders out, while they would pay penalties of various sums.”

Ishola said he was surprised that Mesiogo community, which was not among the eight communities earlier identified, was included in the intruders’ list.

Punch correspondent, who visited the community, observed that all the 49 houses in the community had been marked for demolition.

It was also gathered that the army authorities refused to grant the community audience on the issue.

“They have marked our houses and said unless we pay, the houses would be demolished.

“They have their master plan while we have ours too. In the two plans, there is clear demarcation between the two boundaries. They did not engage us in a dialogue. All they have been doing is to call us on the telephone and threaten us to either pay or our houses would be demolished.

“We have contacted our lawyer and he has written letters to the Oyo State Ministry of Land to re-establish our boundaries.

“They (soldiers) have brought a caterpillar with which they intend to demolish the houses unless we pay,” Ishola said.

When contacted, Deputy Director, Nigerian Army Public Relations Department, who is also the spokesman for the cantonment, Col Ezinma Idima, stated that the estate was built on military land.

“The truth is that that community is one of the communities that encroached on military land. Over the years, we have been making efforts to reclaim it. A ministerial committee was put in place in 2010, which recommended that the land should be left for the community, but the residents have to pay for it. The money will be used to demarcate the army barracks from the communities. They know that they encroached on the army land, including Mesiogo Estate,” said Idima.

The state Commissioner for Lands, Housing and Urban Development, Ajiboye Omodewu, said the community had not written to the ministry over their boundary.

However, Ishola said the ministry had sent its officers to the area after a letter was written to it.