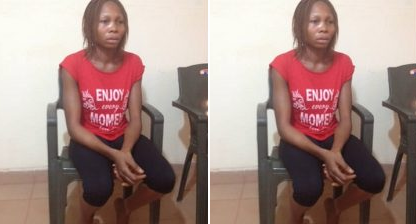 A 22-year-old lady, identified as Tina Rebecca Sunday, is being held by the police in Enugu for killing her uncle, one Friday Mathew.

The incident occurred in the Independence Layout area of Enugu on Thursday, October 26, 2017.

It was gathered that the lady, Tina, a native of Ikot Udobang Ukanafon, in Akwa Ibom State, lived with the now deceased uncle in Ezilo Street, Independence Layout, Enugu.

It was further gathered that Tina was arrested by operatives of the New Haven police station, Enugu, while attempting to escape, after committing the crime.


But the lady, in her confessional statement, has described the killing as accidental.

Tina disclosed that she killed Mathew, a 48-year-old man, while struggling to escape his attempt to have forceful carnal knowledge of her.

She said her uncle has been trying to sleep with her for a very long time.

Rebecca said she has been resisting Mathew’s amorous advances, but the uncle never gave up, until the matter took a tragic turn around 8:30 pm on October 26.

According to Tina’s account, on that fateful night, she had sent Thank-God, her uncle’s 10-year-old son on an errand to buy sugar for her, and was lying down in the room, waiting for the boy to return, when Mathew, thinking she was asleep, snuck up to her bed and tried to force himself on her.

Tina said she gave Mathew a kick on his genitals in a bid to stop him from raping her.

She added that Mathew got enraged, and both of them struggled as he moved to have his way.

The girl then got hold of stone, which she smashed on Mathew’s head.

The uncle fell down and gave up the ghost.

“Really, it was not my intention to kill him as I never intended to do so although he has been disturbing me sexually,” Tina said.

She was said to have promised the boy that she will take adequate care of him, after which she locked up the house and took Thank-God to the home of a relative.

After dropping the boy with the said relative, Tina ran away.

Amaraizu added that the 22-year-old lady was apprehended before she could leave Enugu.

“When the child of the deceased came back and met the lifeless body of his father, he was allegedly warned by the suspect not to shout in order not to attract attention which would lead to her arrest.

“She (Tina) promised the young boy that she would take care of him, then she immediately locked up the house and went away with the boy and dropped him at one of their aunt’s place and disappeared.

“When operatives of the New Haven Division of the Enugu State Command got the report, they swung into action swiftly and were able to arrest the escaping Tina Rebecca Sunday who is now helping the operatives in their investigations,” Amaraizu said.

According to him, “The suspect is now regretting her action and begging for forgiveness as she never intended to kill the uncle.”