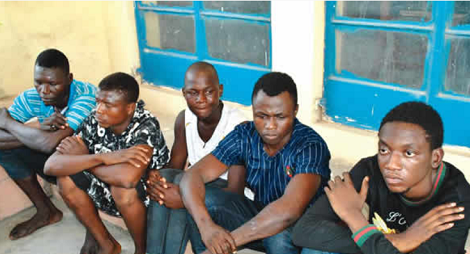 The Niger State Police Command said it has arrested a notorious robber terrorising Angwan Biri Bosso in the Bosso Local Government Area of the state.

Northern City News learnt that the suspect,  Lawal Musa, 23, was trailed and apprehended by police operatives after breaking into the room of one Ahmed Ibrahim, who lived behind NNPC Mega Station in the area.

He was said to have carted away one plasma television set, a laptop and two GSM handsets.

It was learnt that during investigation, the suspect confessed to the crime and provided useful information that led to the arrest of his accomplices whose names were given as Audu Duku, 22, Ali Mohammed, 17, Mubarak Isyaku, 18 and Sirajo Mohammed, 21.


Northern City News gathered that Duku, admitted to have sold the TV and laptop to Sirajo Mohammed for N20,000 and N25,000 respectively.

Unaeze said the suspect was arrested by a team of policemen on patrol, which acted on a tip-off that led to the arrest of Duku’s accomplices.