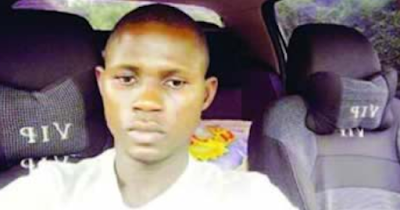 Twenty-five-year-old Paul Ayomaya, a resident of Ajilete, in the Ipokia Local Government Area of Ogun State, had fixed December for the relocation of his family to his newly-completed building in the community.

Two months before the date, he was felled by stray bullets fired by some officials of the Nigeria Customs Service at a checkpoint in the community.

Punch Metro learnt that the officials had on Sunday stationed their van at the checkpoint to prevent smugglers, who were hiding in a bush, from gaining entry into the town.


The smugglers reportedly hauled stones and other objects at the officials to chase them away from the area.

The leader of the customs team was said to have been hit by a stone, prompting the officials to respond with gunfire.

An account of the incident indicated that Ayomaya was on a motorcycle, returning from a filling station in the area, when the bullets hit him in the head.

Punch correspondents gathered that after the incident, Customs operatives deserted their checkpoint from Ajilete to Oke Odan, for fear of attacks by enraged residents.

In another version, the father of two children was said to have gone to clean a church in the community and was returning home around 9am when he was shot.

But a resident, who identified himself simply as Akanbi, told one of our correspondents that Ayomaya had rushed to the scene on hearing that the smugglers were throwing stones at the officials.

He said, “Some smugglers went to pick a car at Olu Odo. They saw the customs officials at the checkpoint and started throwing stones at them. A stone hit their boss. Paul (Ayomaya) heard about the incident and decided to go to watch.

“The customs started shooting and stray bullets hit him in the head. He died on the spot. He had told his wife that they would move to his new house in December, not knowing that he was going to die. He was a kind person.”

Efforts to speak with the wife proved abortive as she was said to be too distraught to speak on the incident.

Meanwhile, some friends of the deceased, residents and social media users had lamented that the killing of innocent persons by customs officials was becoming rampant.

Reacting to the incident, the Public Relations Officer, NCS, Ogun Area Command, Abdullahi Maiwada, said the command had got intelligence report that some suspected smugglers had smuggled three tokunbo vehicles into the village from neighbouring Republic of Benin through the Idiroko border.

He said the operatives stormed the village in search of the smugglers and impounded one of the alleged smuggled vehicles, a Toyota Tundra pickup van.

He added, “It was when our operatives wanted to move the impounded vehicle to our Idiroko office that some hoodlums barricaded the roads with various objects.

“Since our operatives did not want to shoot anyone, they started shooting continuously into air to scare away the hoodlums and to secure their own lives.

“Eventually, our operatives succeeded in taking the impounded vehicle away.

“We later got the information that someone was hit by a stray bullet and he died instantly in the village.

“The person was not even among the hoodlums who blocked the road. It is a very sad development.”

When asked who fired the bullet that killed the victim, Maiwada said he could not say from where the bullet came from.