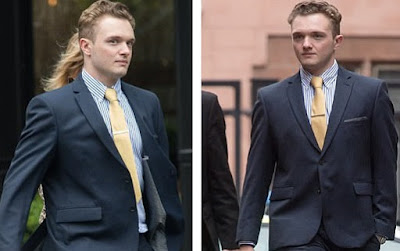 A Selfridges wine salesman who stole £3,000 of designer clothes to fund his drug habit has been jailed for three years.

Jake Coxon, 23, swiped designer clothing from the upmarket department store's Manchester branch, before selling them on the black market.

He was caught when store managers noticed that a substantial amount of stock had gone missing and installed secret cameras.

Over a two week period they filmed Coxon helping himself to designer Moncler t-shirts, gilets and jackets.


He hid the garments down his trousers and then took them back to his counter at the wine department, where he used a device to remove the security tags.

But he was  caught after managers who noticed £3,000 worth of stock had gone missing, secretly installed spy cameras around the stockrooms to catch the culprit.

Coxon, from Hyde in Greater Manchester, was a talented sportsman and had previously played in the Under 18s squad of the Irish Exiles rugby team.

However, he gave up his sporting career due to injury and became a drug dealer offering to supply cocaine, cannabis, benzos and ketamine to friends.