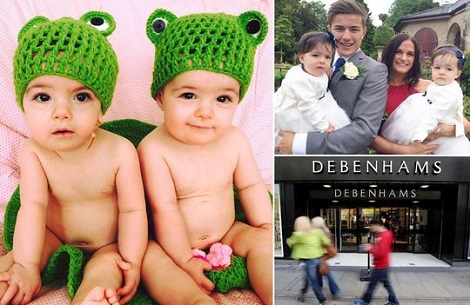 A 15-month-old twin girl choked to death during a shopping trip to buy her first pair of shoes - after being born with a one-in-a-million condition.

Tragic Hazel Eve Blake died after she and her identical twin sister Lily were born with the extremely rare condition tracheo-oesophageal fistula.

Mum Sally McKimm had taken both the girls to buy their first pair of shoes when Hazel began to choke at the Debenhams restaurant in Barrow, Cumbria.

First aiders managed to get her breathing again, but she died hours later from a cardiac arrest in hospital.


The twins underwent emergency surgery at birth for their condition, which means the oesophagus is not connected to the stomach.
They were one of only 30 pairs twins worldwide known to have the condition and even after surgery they could only eat liquidised food.

Mum Sally and dad Aydn Blake said although their daughter's life was short, they were thankful for every moment they spent together as a family.
On September 12 Sally was in Barrow with Hazel and Lily. They had just been to Clarks to get the girls measured for their first pair of shoes.

Afterwards they went to Debenhams in Portland Walk for lunch. As they were eating Sally noticed Hazel was in some difficulty.

She said: "I realised she was really struggling, so I shouted for help - 'Could someone please help me?'

"Lots of people ran over - there was a man and a lady - they seemed to really know what they were doing. They must have had first aid training. I was in such a state I asked them if they would try for me.

"By this point a lady who worked at Debenhams got hold of me, turned me away, and hugged me while they were trying their hardest to try and help Hazel.

"They managed to get her breathing again. I don't know how long it was. I'm sure it was very quick but it seemed like forever. They took us to the hospital."

Hazel took ill at around 1.30pm. Doctors worked tirelessly for two hours trying to intubate and stabilise her. At 3.30pm doctors told her parents she had gone into cardiac arrest and there was nothing more that could be done.

"All the staff were brilliant, all the customers. I do know that they did everything they could."
Mr Blake, 22, a teacher at Victoria Academy in Barrow, said he and Sally are both still trying to come to terms with their loss.