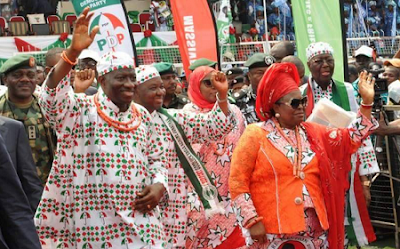 A company says it is still being owed N24 million for printing campaign posters for the re-election of President Goodluck Jonathan in 2015.

The Paste Poster Company Limited stated this on Wednesday through its Managing Director, Olusegun Idowu, when he appeared before the Federal High Court in Lagos.

The Director of Media and Publicity of the Goodluck Jonathan Campaign Organisation, Femi Fani-Kayode, is standing trial before the court over alleged involvement in a N4.9 billion fraud.

Standing trial along with Mr. Fani-Kayode is a former Minister of State for Finance, Nenadi Usman. Other defendants in the case are one Danjuma Yusuf and a company, Joint Trust Dimensions Limited.


The defendants were arraigned before Justice Rilwan Aikawa on 17 counts bordering on conspiracy, unlawful retention of proceeds of theft and money laundering.

They, however, pleaded not guilty to the charges.

Mr. Idowu was the first witness called by the Economic and Financial Crimes Commission to prove its case against the defendants.

While being cross-examined on Wednesday by Mr. Fani-Kayode’s lawyer, Norrison Quakers, the witness told the court that his company got the poster printing job from the Goodluck Jonathan Campaign Organisation through referral by a member of the organisation, Aderemi Ajidahun.

Mr. Idowu, whose company’s office is on Lagos Island, said one Mr. Oke related with his company on behalf of the campaign organisation.

He said his company received cash payments of N24 million and N6 million from the said Mr. Oke.

He said the N24 million the company was being owed was outstanding from the N54 million it was to be paid for poster pasting and consultancy jobs.

When asked by Mr. Quakers whether he had any direct dealing with Mr. Fani-Kayode, Mr. Idowu said he did not.

The case was adjourned till November 20, 21 and 22 for continuation of trial.

In the charges, Mr. Fani-Kayode was accused of conspiring with the other defendants to directly and indirectly retain various sums, which the EFCC claimed they ought to have reasonably known were proceeds of crime.

The EFCC said they allegedly committed the offence between January 8 and March 25, 2015 ahead of the 2015 general election.

Mr. Fani-Kayode has pleaded not guilty and denied any wrongdoing.