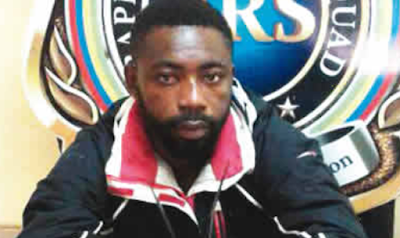 Operatives of the Rapid Response Squad of the Lagos State Police Command have arrested a phone dealer, Jamiu Adebayo, for allegedly receiving stolen mobile phones from some suspected armed robbers in the state.

According to the police, the suspect, who specialised in buying stolen phones from armed robbers and ‘one chance’ gangs, usually redesigned the phones as ‘London used’ (fairly-used phones) which he sold to unsuspecting members of the public.

The 30-year-old, who lived on Araloya Street, Lagos, was reportedly tracked and arrested with an Iphone 7, belonging to one Kolade Johnson, a banker working on Lagos Island.


“The banker had on August 23 boarded a ‘one chance’ bus around 5.45am on his way to work. The robbers dispossessed him of a laptop and two phones, one of which was traced to Adebayo. He was trying to sell it to a customer on Lagos Island when he was nabbed.

“Also found in his bag were six Iphones, four other smart phones and three MTN SIM packs, which he said he collected from the robbers,” the RRS said in a statement on Sunday.

The suspect, who was said to be an ex-member of the National Union of Road Transport Workers in Ajah, reportedly told the police that he was formerly selling clothes before he dabbled into sales of fairly-used phone.

The suspect allegedly said he regularly bought stolen phones from three people, saying he was aware they were robbers.

He said, “I started selling fairly-used phones about a year ago. When customers patronised my clothes shop, they talked about buying fairly-used phones. I started assisting them to collect phones and sell. This was about three years ago. Uche, Alubi and Pinheiro were three major guys I collected phones from.

The police said Uche, Alubi and Pinhero had fled the areas they lived since the arrest of Adebayo.

The Lagos State Police Public Relations Officer, ASP Olarinde Famous-Cole, said the case had been transferred to the State Criminal Investigation and Intelligence Department, Yaba, on the instruction of the state Commissioner of Police, Edgal Imohimi.

He added that efforts were on to arrest the fleeing suspects.