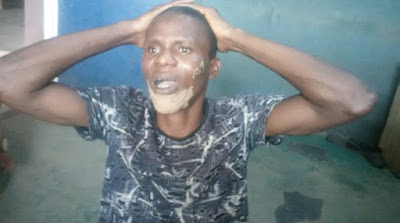 A member of a robbery gang that shot Adeyinka Akingbade, the Divisional Police Officer of Ogbere Divisional Headquarters, Ogun State has disclosed the reason why they attacked the police officer.

Wasiu Ganiyu, who spoke exclusively with Premium Times at the Federal Special Anti-Robbery Squad, FSARS headquarters in Abeokuta, confessed that the police boss was shot because of “his effrontery in trying to disarm them(robbers) at the Monepark hotel, Itele-Ijebu where they hid to perfect a robbery operation strategy.”

The suspect also confirmed that he completed a five-year jail term in Oyo State a year ago.


He said he ventured into robbery operations immediately after his release from prison, adding that, on the day the gang shot the police officer, they were preparing to strike on the Sagamu-Benin Expressway.

The suspect, who also confirmed his active roles in the robbery gang of the late notorious robbery kingpin, popularly called Godogodo, said he joined another robbery gang led by ‘Mungo Park’, after completing his jail term.

”We were in the Moneypark hotel room in Itele, when the Divisional Police Officer, broke into our room and ordered us to surrender. We were amazed by his effrontery, and launched an attack on him,” he disclosed.

Mr. Ganiyu, speaking in Yoruba language, added that ”within the twinkle of an eye, the robbery ringleader, Mungo Park, removed a gun from the bed and opened fire on the police officer, and also took away his rifle, before bolting from the hotel.”

He said on their way out, they also took time to rob a fuel station on the expressway, as well as snatched a car to make their escape from the scene easier.

The 32-year-old suspect said as they escaped into the bush, Mungo Park told them that the shot police officer was a Divisional Police Officer, whom he knew well. Mr. Ganiyu said at that point, he knew ”they (the gang) were in big trouble.”

He said while they were in the bush, the FSARS closed upon them and rounded them up; adding that Mungo Park was shot dead in the ensuing gun battle.

The DPO however survived it.