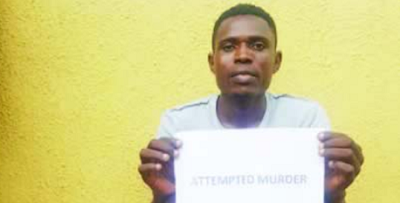 The Zone 2 Police Command, Onikan, Lagos State, has arrested a driver, Orabe Philips, for allegedly hitting his former boss, Mr. Robert Wheelers, with a pestle over an unfulfilled promise.

Punch Metro learnt that Philips was arrested on Friday in the Ikorodu area of the state by men of the Zonal Intervention Squad, who had earlier received a distress call on the attack.

It was gathered that the victim had arrived the country on August 25, 2017, and was driven  from the airport by the suspect, who had formed a relationship with the American when he worked with the Tony Elumelu Foundation in 2015.

He reportedly drove Wheelers to his (driver) house on Adeniyi Street, Ikorodu, where there was an argument and he hit the American in the head with the pestle at midnight.


Philips reportedly fled the scene, while Wheelers was taken to the Ikorodu General Hospital.

The Zone 2 Police Public Relations Officer, SP Dolapo Badmos, said during interrogation, the suspect confessed that he wanted to kill the American for refusing to give him some money he promised him.

Badmos noted that Philips said he was frustrated that a charm he got from a prophet to make Wheelers give him the money, did not work.

She said, “Mr. Robert Wheelers arrived in Nigeria on August 25, 2017, and was picked up at the airport by the suspect, who once worked with him at the Tony Elumelu Foundation in 2015.

“He drove the man to his house in Ikorodu, where he was to reside for about two weeks till his return to the US. The victim was attacked by his host at midnight and was left in a pool of blood after which the suspect fled.

“The zonal command received the distress call and operatives were dispatched to launch a manhunt for the suspect while the victim was rushed to a hospital.

“On September 8, upon intelligence gathering, the suspect was arrested in his hideout in Ikorodu.

“The suspect, who was interrogated by the Assistant Inspector-General of Police in charge of Zone 2, Ibrahim Adamu, confessed to have hit the victim’s head with a pestle three times, stating that the victim reneged on his promise to give him an unspecified amount of money; a promise the victim couldn’t keep, which angered the suspect.

“The suspect, when asked why he wanted to kill the American because he refused to fulfil a promise, said he had placed all his hope in the money he was to get from the white man.

“He said he had even consulted a white garment church where he was given a charm to use on the man, but he was angered when the victim didn’t obey his instruction.”

Badmos said investigation was ongoing, adding that the AIG had directed that no stone should be left unturned in bringing the case to a conclusion.